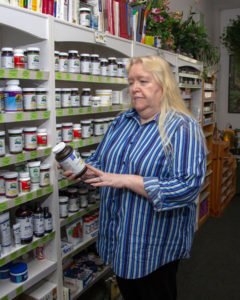 Herbs Plus was featured in the September/October issue of Modesto Living Magazine, which is distributed throughout Stanislaus County. You can read the article online or download the PDF version.

Illnesses do not come upon us out of the blue. They are developed from small daily sins against Nature. When enough sins have accumulated, illnesses will suddenly appear.

The terms “earthing” and “grounding” are interchangeable, and refer to the act of walking barefoot on the earth, this in turn allows for the transfer of free electrons from the earth into our body, through the soles of our feet. END_OF_DOCUMENT_TOKEN_TO_BE_REPLACED

Cholesterol is an essential molecule without which there would be no life, so important that virtually every cell in the body is capable of synthesizing it.
-Michael R. Eades, M.D.

Cholesterol is not a deadly substance, but a substance essential to the cells of all mammals. 25% of the entire cholesterol content of the human body is found in the brain. Cholesterol is vital for mental health and studies have shown that those who lower their cholesterol too much can become aggressive or suicidal and have a higher than normal chance of getting Alzheimers or Parkinsons’ disease. END_OF_DOCUMENT_TOKEN_TO_BE_REPLACED

We can not understate the importance of our circulatory system – and not just because it transports blood. Untreated, circulatory ailments lead to chronic illness, and in the worst case, death. Understanding its functions and health symptoms are part of managing your health.

The circulatory system not only delivers a continuous supply of food and oxygen to the cells. Simultaneously, carbon dioxide and other waste materials produced by the cells must be picked up for removal from the body. The three primary components – the heart, the blood, and the blood vessels – work together to make this amazing system function at is optimum levels. END_OF_DOCUMENT_TOKEN_TO_BE_REPLACED

Get to know your liver

The liver is the body’s largest internal organ, weighing about three and a half pounds. It manufactures, processes, stores many chemicals and produces bile. The liver has over 250 individual functions, the most important ones being the storing and releasing of blood sugar (glucose) for energy, sorting and processing vitamins and minerals, breaking down toxins into less harmful substances and recycling old blood cells.

Like the heart the liver also has a dual blood supply: the hepatic artery brings freshly oxygenated blood from the heart and the portal vein brings blood from the stomach and intestines laden with nutrients from your food. END_OF_DOCUMENT_TOKEN_TO_BE_REPLACED

Can your blood type be linked to disease caused by diet that is not right for you?

Can your blood type be linked to your longevity, even your compatibility with others?

Your blood type has everything to do with how you respond to stress, the strength of your immune system, how you digest food and more.

Did you know in Japan certain businesses use the blood type of a person when placing them in positions, legend is “A’s” are calm and trustworthy, “B’s” are creative and excitable, “AB’s” are thoughtful and emotional and “O’s” are confident leaders. END_OF_DOCUMENT_TOKEN_TO_BE_REPLACED

Night sweats are episodes of sweating that occur while a person is sleeping. The person affected by night sweats can wake up with their night-clothes and bedding damp with sweat. Some people can al-so sweat excessively during the day. Night sweats also involve the hypothalamus, but in this case, the kidneys and adrenals are also involved. In TCM, it can signal a depletion of the energy the Chinese call jing, which is our basic life energy.

Thirty-seven percent of Americans mistake dehydration for hunger. They eat when they should drink.

Pregnant women should drink a minimum of 80 to 104 fluid ounces per day. END_OF_DOCUMENT_TOKEN_TO_BE_REPLACED

On April 1, CBS aired a piece they called “Sugar”, which reported on new research coming out of some of America’s most respected institutions. Some of these researchers are calling sugar a toxin and naming it a driving force behind a few of this country’s leading killers, including heart disease and cancer. Others are declaring it to be as addictive as drugs and alcohol.

In the report, CBS spoke to Eric Stice, a neuroscientist at the Oregon Research Institute, who is using functional MRI scanners to learn how our brains respond to sweetness. In his research, Dr. Stice has found that sugar activates our brain in a way similar to how it reacts to drugs like cocaine. Scans were taken while the subjects were given sips of a sweet beverage and they found that Dopamine, a chemical that controls the brain’s pleasure center is being released, just as it would in response to drugs or alcohol. By scanning hundreds of volunteers, he’s learned that people who frequently drink sodas or eat ice cream or other sweet foods may be building up a tolerance, much like drug users do. “As strange as it sounds, it means the more you eat, the less you feel the reward. The result is, you eat more than ever,” explains Dr. Stice.

Electrolytes are essential because they are what the cells of the nerve, heart and muscles use to maintain voltages across their cell membranes. They transport electrical impulses such as nerve impulses and muscle contractions across themselves and to other cells.

Electrolytes are also very important macro minerals that help the body absorb minerals. Electrolytes are the smallest of chemicals important for the cells to function and allow the body to work. Certain electrolytes, such as sodium and potassium are critical in allowing cells to generate energy and maintain the stability of the cell wall, as well as to function in general. END_OF_DOCUMENT_TOKEN_TO_BE_REPLACED